Leg ulcers are common, especially in older people, and most are due to venous insufficiency: the same underlying valve issue that causes varicose veins. They are horribly painful, distressing things that ruin lives and can take ages to heal up (if ever) if treated through traditional methods.

Here at Veincentre, we have almost 20 years’ experience in treating venous leg ulcers via EVLA and foam sclerotherapy. We find that these methods lead to quicker healing and longer-lasting results (they tend to remain healed) in comparison to traditional methods like compression bandaging.

What is a venous leg ulcer?

A skin ulcer develops when an area of skin breaks down to reveal the underlying flesh.

The fundamental problem is increased pressure of blood in the leg veins, which damages the skin and then eventually breaks down.

This increased pressure is usually due to valve failure, i.e. venous incompetence, which is the normal cause of varicose veins. Most patients with leg ulcers will also have varicose veins (or have a history of them).

How are they diagnosed?

The appearance of a venous leg ulcer is usually fairly typical and is distinct from ulcers caused by other conditions (like diabetes or arterial problems). Having said that, we can only say definitely that an ulcer is venous by undertaking a colour duplex ultrasound scan and demonstrating reflux.

What is the best treatment for venous leg ulcers?

As previously mentioned, the traditional method of treating venous leg ulcers was by frequent dressings and tight bandaging (so-called “four-layer” bandaging). This was usually undertaken by district nurses, and it was incredibly time-consuming. It has been estimated that treating leg ulcers took up 50% of district nurse’s time.

Unfortunately, changing practice in medicine, especially long-standing practices like leg ulcer compression bandaging takes a long time. There is also an element of resistance from those who have traditionally treated X condition if the treatment of that condition becomes the province of someone else. For these reasons, along with ignorance and possibly some unjustified concerns about costs that most leg ulcers are still not managed as recommended by the EVRA trial (see below) i.e. by EVLA to treat the cause of the problem. 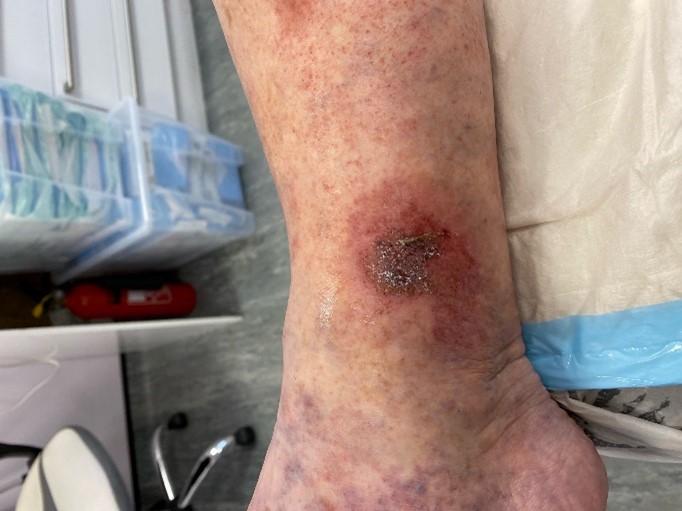 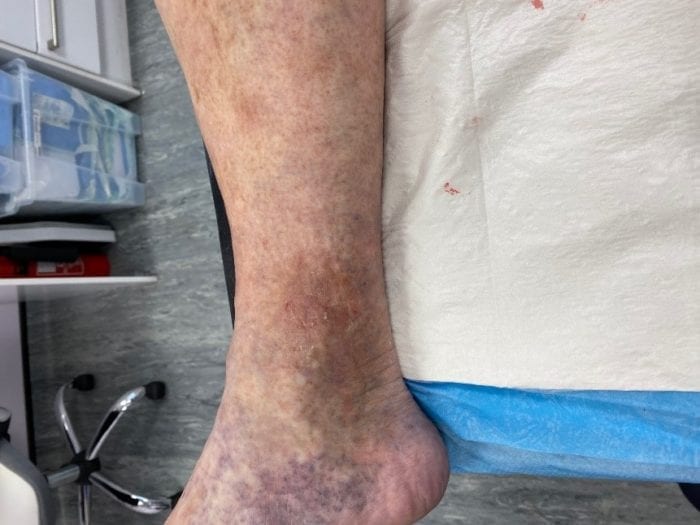 We were delighted to see the results of the UK-based EVRA trial published in the prestigious New England Journal of Medicine which clearly supports our strategy. (EVRA means “early endovenous ablation”.)

As the article itself states, this trial was the first to demonstrate that “early endovenous ablation of superficial venous reflux resulted in faster healing of venous leg ulcers and more time free from ulcers than deferred endovenous ablation”.

This followed an earlier study

“Long term results of compression therapy alone versus compression plus surgery in chronic venous ulceration (ESCHAR): randomised controlled trial. BMJ. 2007 Jul 14;335(7610):83. doi: 10.1136/bmj.39216.542442.BE. Epub 2007 Jun 1.”  that had shown that traditional surgical correction of superficial venous reflux in addition to compression bandaging does not improve ulcer healing but reduces the recurrence of ulcers at four years and results in a greater proportion of ulcer-free time.

Although this earlier study had shown that surgical correction of venous insufficiency reduced recurrence, the fact that it also showed no improvement in ulcer healing held back the most effective treatment of venous leg ulcers by many years.

The traditional advice for preventing a recurrence of venous leg ulcers was to wear compression bandaging or a compression stocking. This is uncomfortable and inconvenient.

The best way to prevent the recurrence of venous leg ulcers is to treat the underlying cause, i.e. EVLA.

In most cases, after the ulcer has healed up post-EVLA, it will not be necessary to wear compression stockings, which means that you can get on with normal life.

This website uses cookies to improve your experience while you navigate through the website. Out of these, the cookies that are categorized as necessary are stored on your browser as they are essential for the working of basic functionalities of the website. We also use third-party cookies that help us analyze and understand how you use this website. These cookies will be stored in your browser only with your consent. You also have the option to opt-out of these cookies. But opting out of some of these cookies may affect your browsing experience.
Necessary Always Enabled

Performance cookies are used to understand and analyze the key performance indexes of the website which helps in delivering a better user experience for the visitors.

Analytical cookies are used to understand how visitors interact with the website. These cookies help provide information on metrics the number of visitors, bounce rate, traffic source, etc.

Advertisement cookies are used to provide visitors with relevant ads and marketing campaigns. These cookies track visitors across websites and collect information to provide customized ads.

Other uncategorized cookies are those that are being analyzed and have not been classified into a category as yet.