Janet Race aged 66 from Norwich, first became aware of her varicose veins after having her two children but left them untreated as they were painless. Janet does admit to often hiding them under her trousers and leggings for about 40 years. She was so anxious about having her legs treated that she watched Strictly during the whole procedure.

Why did Janet seek varicose veins treatment at Veincentre?

Janet worked in retail for many years and was on her feet for long periods of time. It was only after she lost weight and went from a size 14 to a size 10 that she felt even more self-conscious about her “ugly leg” as she liked to call it and decided to do something about it and contact Veincentre.

Why did Janet choose Veincentre?

“Veincentre has been wonderful throughout the entire journey. I got a good feeling from my initial call to the advisory team right through to the aftercare and I couldn’t believe how welcoming everyone was and how they all put me at ease. I suffer with anxiety and sent a huge list of questions over which they gladly answered and nothing was too much trouble. I was so worried about doing the procedure that even my grandson at university sent me a message telling me I can do this. I also found Veincentre to be the most competitive in terms of cost too which was brilliant.” 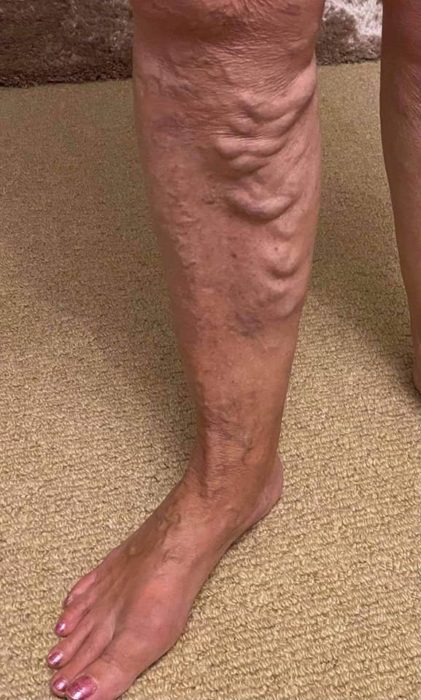 What procedure did Janet undergo to treat her varicose veins?

At consultation with Mr Al-Jundi, during a duplex ultrasound scan, it was found that Janet had an underlying cause to her varicose veins and a treatment plan was formulated specifically for her condition. She had laser treatment (EVLA) to both legs to close off the veins with faulty valves, and foam sclerotherapy to treat the visible veins. The whole procedure was completed in just 90 minutes. She then attended for a follow-up 6 weeks later, where the scan confirmed that EVLA was successful and had further foam sclerotherapy to further improve the cosmetic appearance. After both treatments, she had to wear stockings for a week and was encouraged to keep active.

How was it for Janet?

“When I posted my before and after photos on my Facebook page the feedback was unbelievable. I can’t recommend Veincentre highly enough and if there’s anyone reading this that’s anxious and unsure then I hope reading my story will help them to have the confidence to do it.”

As a big fan of music and dancing Janet asked the consultant Mr Al-Jundi if it would be ok to put in her AirPods and watch Strictly on her phone whilst having the treatment, which he gladly agreed to. “My husband Jim was by my side the whole time and was absolutely fascinated by the whole process, he talks about it to people even more than me,” Janet said.

Janet attends her daughter’s Slimming World classes once a week and she’s received support and encouragement not only from her family and friends but even all the members who attend the classes.  “Every week people were asking to see my legs and asking for Veincentre’s number, they couldn’t believe that I had no scarring and how I described the procedure as pleasant.”