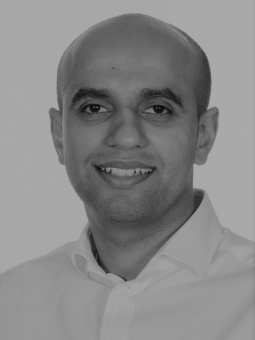 Raf graduated with ‘Honours’ from the Victoria University of Manchester Medical School in 2003. Raf initially trained in Vascular and General Surgery, successfully becoming a Member of the Royal College of Surgeons of England (MRCS Eng). As technological advancements in Interventional Radiology, particularly Vascular, provided increasingly attractive minimally invasive alternatives to open surgery, Raf pursued Radiology training to develop the skills for advanced image-guided ‘pinhole’ interventions. Raf undertook specialist training at the Leeds Radiology Academy and is a Fellow of the Royal College of Radiologists (FRCR) with sub-speciality Fellowship-level training in Vascular and Interventional Radiology.

Raf specialises in the diagnosis and minimally invasive treatment of complex arterial and venous disorders. Raf has published work in peer-reviewed journals, authored book chapters and international guidelines in Interventional Radiology. Raf has presented educational and scientific material at international meetings and also been an invited speaker and tutor at international conferences in Interventional Radiology. Working in a busy teaching hospital, Raf enjoys being a tutor and supervisor for radiology trainees and junior doctors in Oxford. Raf is also a peer-reviewer for scientific journals and an examiner for Oxford University Medical School exams.

Away from work, Raf enjoys spending time with his wife and two young children with shared passions for travel, climbing, cycling and walking to enjoy the local countryside.

Dr Patel has committed to working at Veincentre on the above days. If you book an initial consultation with Dr Patel, all your future appointments will be with Dr Patel.

Please note that due to holidays Dr Patel may not be available every week.

“I enjoy working at Veincentre because it allows me to provide effective, minimally invasive, modern treatments to a large number of patients at reasonable cost. The collaborative, friendly and supportive working environment at all levels of the organisation makes it easy to focus on achieving the best results for the patient. The best part is seeing patients after their treatment journey and knowing a worthwhile difference has been made to improve their quality of life.”

Dr Raf Patel does not hold a share or financial interest in Veincentre Ltd.

Dr Raf Patel does not have a share or financial interest in equipment used at Veincentre Ltd.

Dr Raf Patel does not hold any paid advisory role(s) at Veincentre Ltd.